Just this past year China has been strewn with a number of beauty challenges that alarmed the foreign world. From Chinese women hiding their waist behind an A4 piece of paper to show off their thin waists, to wrapping a 100rmb bill around their wrists to show their slenderness, the challenges have pushed China beauty standards to new heights and into an international spotlight. The facts about China’s true standards of beauty are more complex than these fads, however.

The characteristics commonly considered as ‘beautiful’ in China of pale skin, big eyes and rosebud lips is well known. But are these beauty standards the result of Western influences over the Chinese culture, or are they more harmful to a person’s health than those of other countries? We’ve determined to let the facts about China beauty standards speak for themselves. 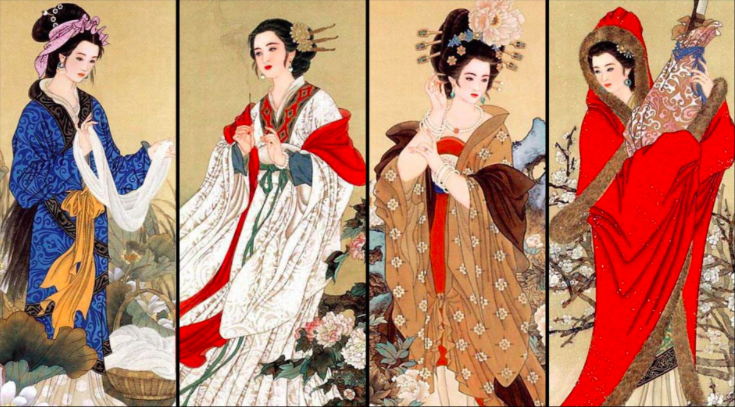 1) In ancient times, darker skin was associated with poverty or a lower social status while having pale skin often meant that you came from an upper class and did not have to work outside in the fields. To have fairer skin, women in China used to digest crushed pearls or bleach their skin with dangerous oxides in the belief that it would make their skin lighter. Today the preference for lighter skin is still among the top measurements of beauty, with whitening products accounting for 70% of online Baidu searches for cosmetics in China.

This beauty characteristic has existed in China since pre-Qin, as compared to the Western craze for tanning which has been around ever since Coco Chanel returned from vacation in 1923. The US tanning salon industry rakes in a yearly revenue of 5 billion USD , whereas about 71% of China’s 5.5 billion USD skincare market is dedicated to whitening (estimate 3.9 billion USD). Both whitening and tanning can cause cancer through long-term use.

2) Despite the fact that around 50% of Chinese are born with monolids, double eyelids are considered a very attractive feature in China as they make one’s eyes seem larger. Like pale skin, large eyes have historically been idolized in Chinese culture as they make a woman appear more innocent, feminine, and doll-like.

Cosmetic surgery, particularly for double eyelids, has been on the rise in China. According to statistics from the Health Ministry, cosmetic surgery is the 4 most popular way to spend discretionary income in China, with homes, cars, and travel coming in first through third respectively. In 2010 the ISAPS estimated that China accounted for 12.7% of all plastic surgeries in the world, placing 3rd behind Brazil and the US. The top prize for per capita surgeries, however, belongs to South Korea, where an estimate of 1 in 5 women undergo cosmetic surgery. There are no facts about China’s cosmetic surgery consumption from the past year.

3) Being skinny in China has not always been the ideal image of beauty. During the Tang Dynasty, women were preferred if they had a full waist and round hips.

Being “sexy” is also not an accepted beauty standard as it is often associated with poor morals. The popular Tang Dynasty TV drama ‘The Empress of China’ was initially blocked by Chinese censors for too much cleavage. It later re-aired with cropped frames that were less “sexy”.

4) It is no secret that media and foreign brands have a huge impact on Chinese consumers. Especially in the beauty industry, foreign brands are almost always preferred for their higher quality, and as the table from Global Trade Atlas below shows, continue to grow in the Chinese market. 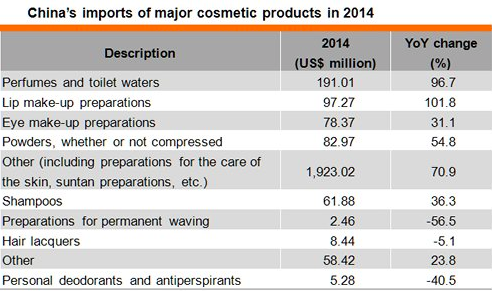 Media trends in China, such as the one inspired by South Korean boy band member who could wrap his arm around his back to touch his bellybutton, are not too dissimilar to media trends in other parts of the world. The 3 most popular waist trainer sales in the U.S. skyrocketed by 250% in one year after Kim and Khloe Kardashian began the Instagram craze.

5) Any list of facts about China’s culture of beauty would be incomplete without mentioning societal pressure on women as well. Young women in China face great societal pressures that are deeply engrained in their history and culture. An old Chinese proverb claims “there are no ugly women in the world, only lazy women in the world”, implying that is it more socially acceptable to adhere to common beauty standards through makeup and other practices than it is to embrace your physical flaws. Social pressures on women to look and act a certain way are generally for the purpose of finding a husband and getting married.

“Girls with an average or ugly appearance… hope to further their education in order to increase their competitiveness. The tragedy is they don’t realize that, as women age, they are worth less and less, so by the time they get their MA or PhD, they are already old, like yellowed pearls.”

A Chinese Women’s Federation released the previous statement after International Women’s Day. Once a women reaches the age of 27, she is considered a “leftover woman”. These Chinese women face shame and terrible pressure from their families to find a husband at any cost, and often receive unsolicited help from marriage markets and matchmakers.

Why do Chinese try to look more “Western”?

The answer we found is: they don’t. To Chinese people, “looking Western” has much more to do with having an hourglass figure and a large extremity than it does large eyes and pale skin. In fact, the standard beauty trends for pale skin, large eyes, and thin lips has been fairly constant throughout Chinese history, a trend lasting longer than the U.S. has even been considered an independent country.

Despite their allure for foreign beauty trends – especially from South Korea – and their preference for the higher quality of Western products, Chinese consumers recognize a difference between buying foreign goods and trying to look like foreigners. The facts about China beauty ideals and the Chinese marketplace are hard to ignore.

What do you think about these facts about China beauty standards? Share your comments below.