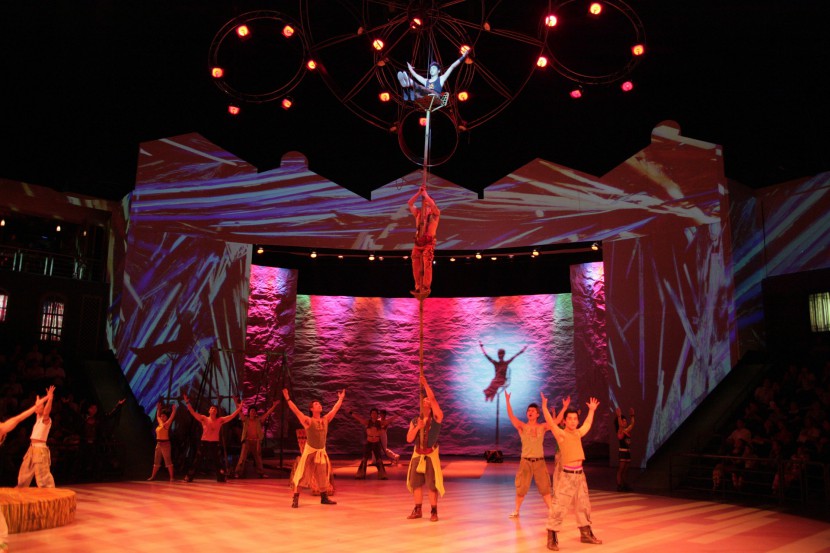 I had always heard of China’s famous acrobatic shows but never had been there. I finally had a chance to go see ERA show in Shanghai a couple weeks ago, and I regretted that I hadn’t gone earlier.

I was impressed with spectacular combination of visuals, live music, and costumes. I spent approximately $30 on my ticket, but there are also cheaper and more expensive ones available.

(A friend of mine told me the expensive ticket wasn’t worth it – I had a mid price ticket and still had a perfect view!)

In this sphere, twelve motorcyclists fly around and make noises.

It’s sweat dropping how fast they race without bumping into each other.

The light effects and music choice also created tension – one of my friends couldn’t keep her eyes open because she was terrified they would crash!

One of my favourite parts about this show was the live music played by the Chinese orchestra team and the female vocalist. Having seen Cirque de Soleil before, ERA show felt less operatic to me but it still had the same high standard of performance.

Culturally rich, the show mixed traditional Chinese martial arts with different contemporary dances and movements. Even without speaking, there was a bit of a story line about China’s progress over the years. Oh, and there was an intermission if you need to take a bathroom break.

My friends and I loved the performance! The event is popular with tourists and locals alike, and would be a great time for people of all ages.

After returning to our apartment, I had a Tibetan cold beer.

I fell asleep immediately as I was exhausted from running around the city all day.

I definitely dreamed about being an acrobat that night. If anyone is thinking about going to China, I definitely recommend Shanghai Circus World’s ERA show!

You can always find things to do in China! Apply now to teach in China, make new discoveries, and have new experiences.