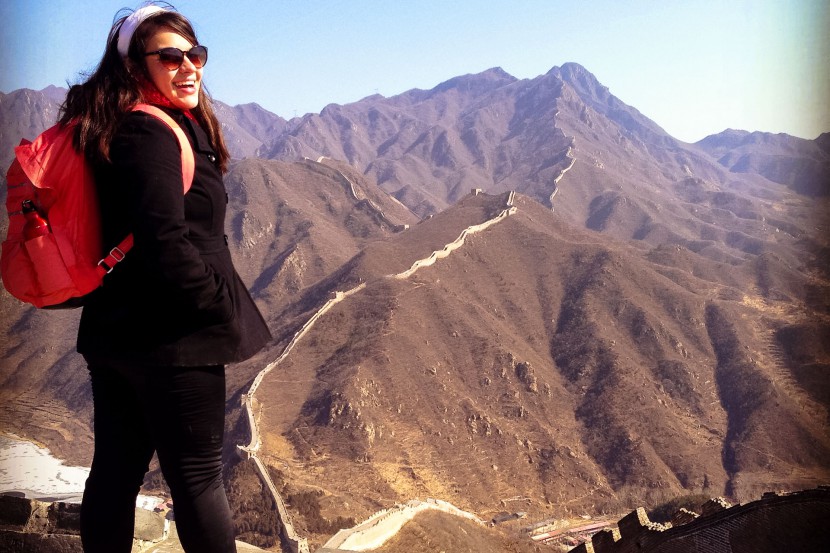 新年快乐！Happy Spring Festival from all of us here at GoGlobal!

This past week was China’s Spring Festival otherwise known as Chinese New Year. It’s a time where the Chinese travel back home to be with their families or tourists like myself just travel around China.

I decided to escape the jungle metropolis of Shanghai and instead travel to the older concrete jungle of Beijing. Beijing has more historical tourist sites than Shanghai, and we decided to go to the Forbidden City and the Great Wall of China.

The Forbidden City was nothing like I imagined. For starters, buying tickets for Beijing tourist sites during a national holiday was one of the most difficult things I’ve done in my life. The amount of people that were waiting in line with us was absurd. In fact, it wasn’t even a line that formed, just a giant crowd of people pushed together like sardines. 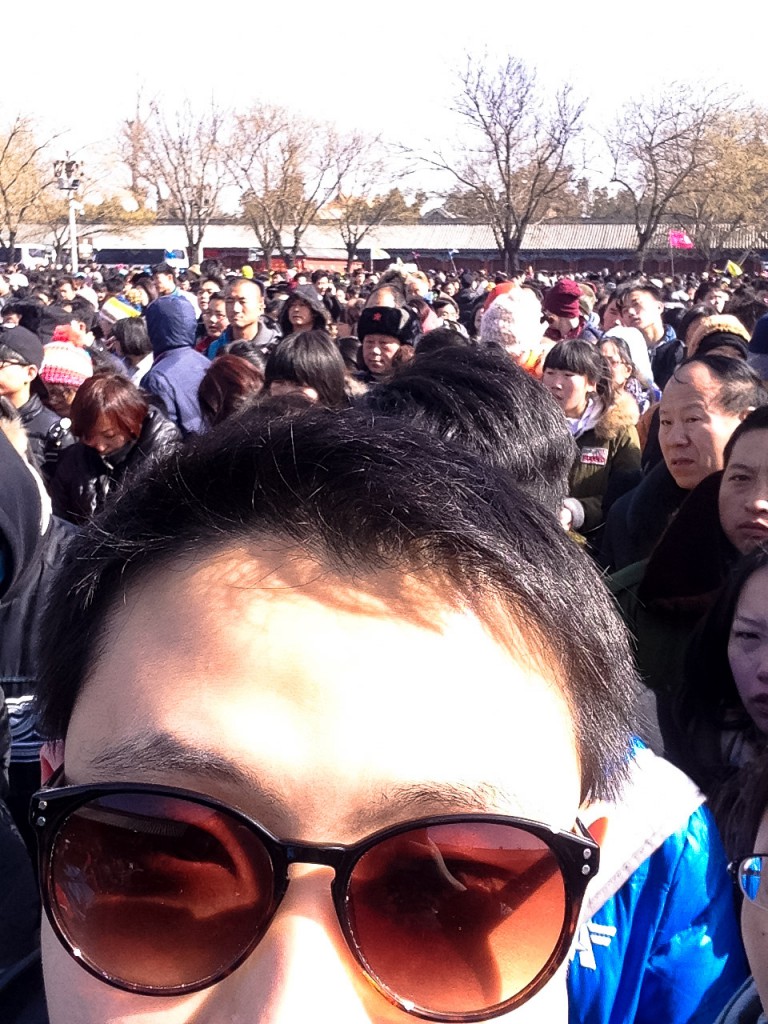 After about an hour of waiting though, my friends and I bought our tickets and set off to the giant red doors that led to the entrance of the Forbidden City.

Once we went through the security checkpoint, we entered the first main courtyard of the Forbidden City. It was very open and spacious, but again this is China so there was still a good amount of people.

Towards the end of the courtyard was a huge traditional Chinese building. It had 3 sets of stairs leading to its entrance but the center staircase had a large slab on concrete with a dragon on carved into it. As we continued to venture further into the Forbidden City I noticed that each middle staircase had this same concrete slab.

Later on I learned that when the emperor lived in the Forbidden City he was the only person allowed to walk over the dragon. His servants would walk along side him on the steps and would carry him over the dragon.

The Forbidden City was endless. Each time we left one building’s gates it lead to an even bigger and grander building. Once we reached the end of the City we walked through the garden area. The garden looked sad since it’s wintertime and all the plants haven’t blossomed but overall it seemed peaceful once you take out all the people.

It’s weird to think that if there weren’t so many people around, my perception and experience of the Forbidden City would be quite different. By having such large crowds form throughout the city, it was harder appreciate the scale of the architecture.

The Great Wall of China

The other main attraction I visited in Beijing was the Great Wall of China. Climbing the Great Wall has been a childhood dream of mine, and it was probably one of the most amazing things I’ve ever experienced. It was a weird feeling though because most people tell you growing up to follow your dreams, but I don’t think anyone tells you that those dreams can actually happen. 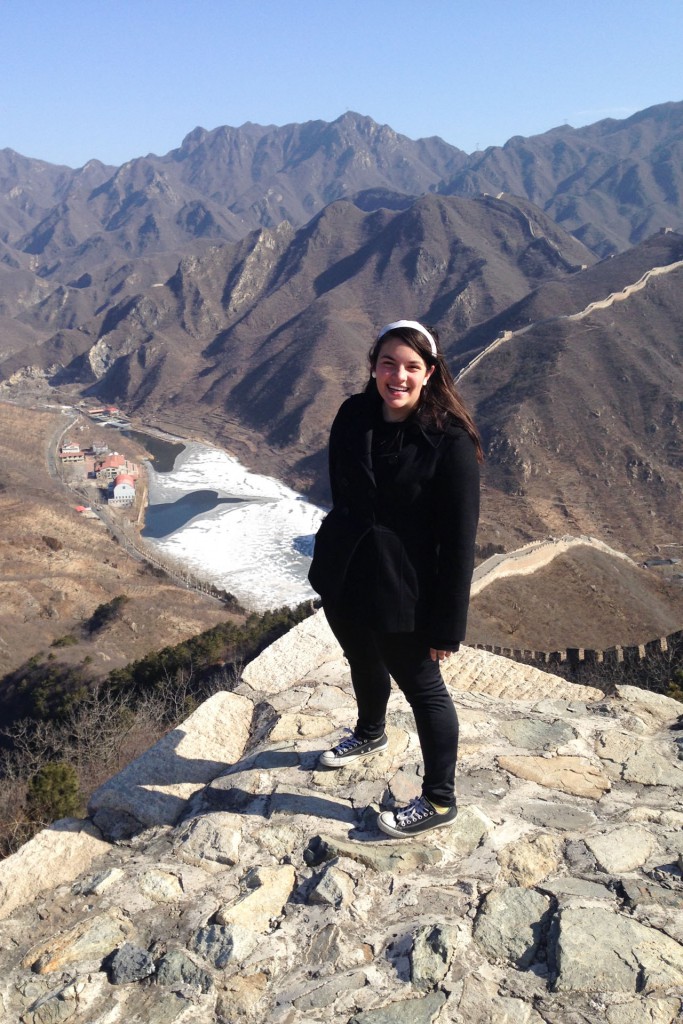 My friends and I hired a driver for the day and he took us to an area of the Wall that hasn’t been fully restored. Fortunately this is not the spot where most tourists choose to climb, so we only ran into one other group during our entire hike.

However, since this portion of the Wall hadn’t been fully restored it was hard to climb up all the stairs since there were some loose bricks here and there.

I hadn’t realize that climbing up the Great Wall would be so exhausting. It was quite steep and there were a ton of steps to get through. During our climb we took some mini breaks in these little stone huts that were built along the Great Wall. Once we reach the top point of our hike the view was breathtaking. 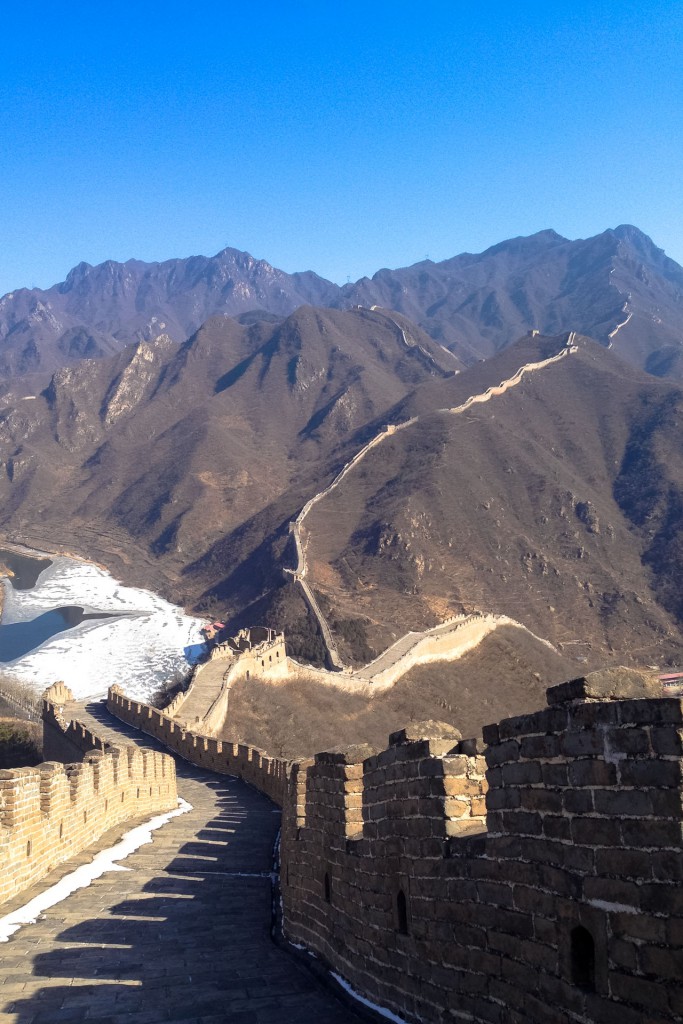 My friends and I couldn’t believe that we had accomplished this great task. We had luck on our side, because it’s not everyday you have clear, non-polluted skies in China. We could see all the mountains and the rest of the Great Wall in the background perfectly.

The pictures of the Great Wall don’t do it justice, it’s much more majestic than any camera could ever capture.

Being on the Great Wall was the first time that I truly felt like I was in China. Sure we don’t have these massive crowds everywhere in the US or all the different types of street food, but those have become part of my daily life.

Standing on top of the Great Wall I was reminded that China has become my home for the next couple of months.

Have you been to the Great Wall of China or the Forbidden City? Share your experiences below.