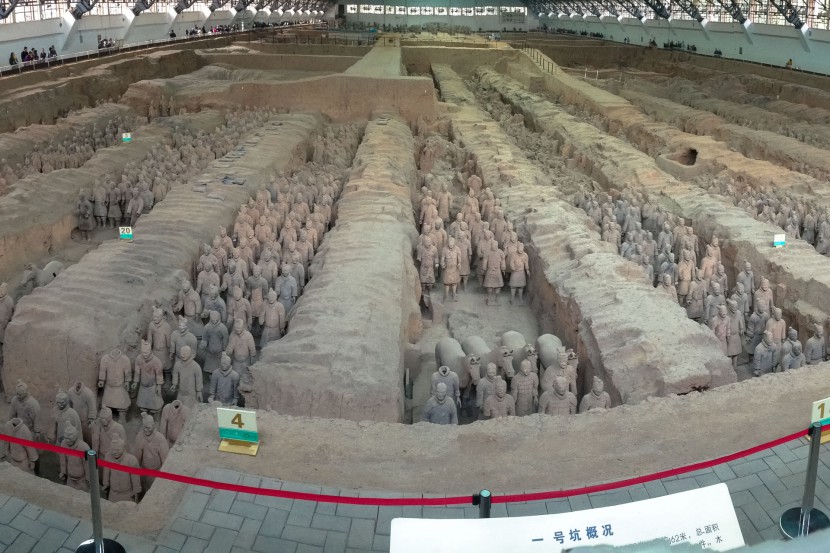 This weekend I hopped on a plane and traveled to Xi’an, a city located in Western China. During my time in Xi’an I had two things I wanted to do:

My biggest tip for Xi’an: hire a private driver. Since those two destinations are quite far from the city center, we spent a lot of money and time taking taxis to different destinations. A private driver would have been less expensive, especially for the group of seven people I was traveling with. Take a look at my tips and tricks for these two historical Xi’an sites.

Mt. Huashan is one of the most dangerous mountains in the world, and it was something I had to do while in Xi’an. It has five peaks: The North Peak, South Peak, East Peak, West Peak, and Central Peak. 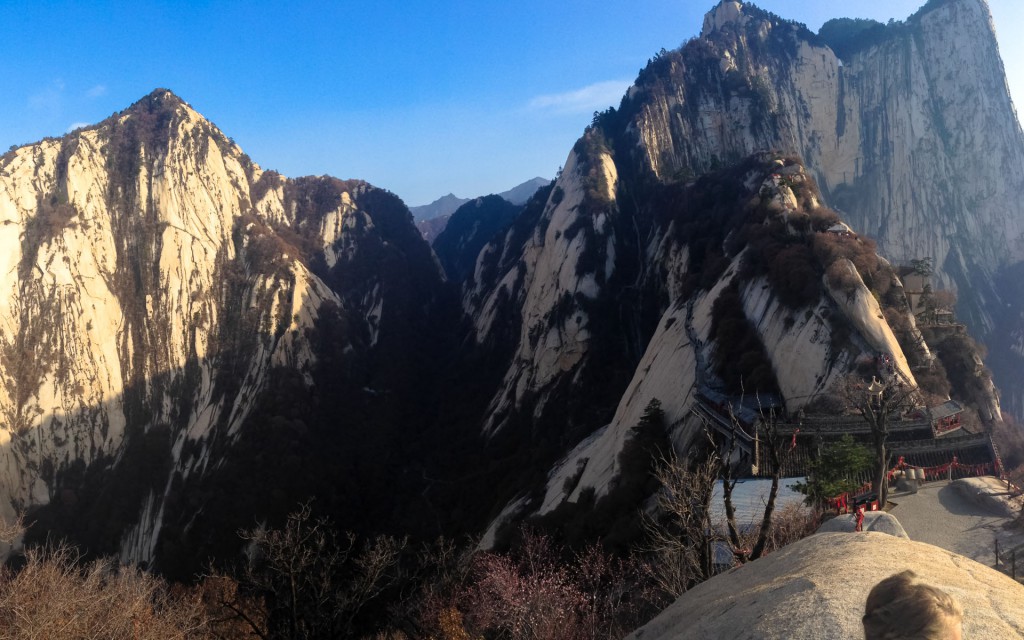 Mt. Huashan divides its ticket sales by an on-season from March 1 – November 30 and an off-season period from December 1 – February 28. I went to Huashan during the on-season and got the student discount price of 90 RMB for an entrance fee.

There are a few ways to get there – you can take a two and a half hour bus ride, an hour and a half train ride or a 25-minute bullet train ride. Since my friends and I were short on time we decided to take the bullet train that left from the North Railway Station in Xi’an. Our tickets were 55 RMB each way.

The hike up to the North Peak was no joke. It was 8.5 miles of straight up hill climbing. There were times where we had to climb up a set of stairs that were so steep and narrow that you had to hold onto these chains in order to keep going. The hike was exhausting and often times very scary. With one false move you could have a long fall down.

Once you get to the top of Mt. Huashan, the view is incredible. You can see all the peaks and the mountains seemed to go on forever. There are many areas designated for picture taking, which makes posing with this landscape much easier. In addition, at the top of the mountain you can buy a medal (10RMB – 45 RMB) with you name and the date engraved in it.

Hiking Mt. Huashan was extremely difficult. If you have asthma I strongly recommend bringing you inhaler, I know I needed mine. Also, because the mountain is so high up, I experienced altitude sickness, which was very unpleasant. To avoid this from happening to you, bring lots of water and snacks to consume during your hike.

It took us about 6 hours to climb up, take pictures at the top and then take the gondola back down so be prepared to spend quite a bit of time on the mountain.

Finally, when we got to the bottom of Mt. Huashan we needed to take a bus (20RMB) all the way back to the train station. Overall, I loved my experience hiking Mt. Huashan. Though it was very difficult and at times I wondered if this mountain was ever going to end, it was all worth it when I saw the view. 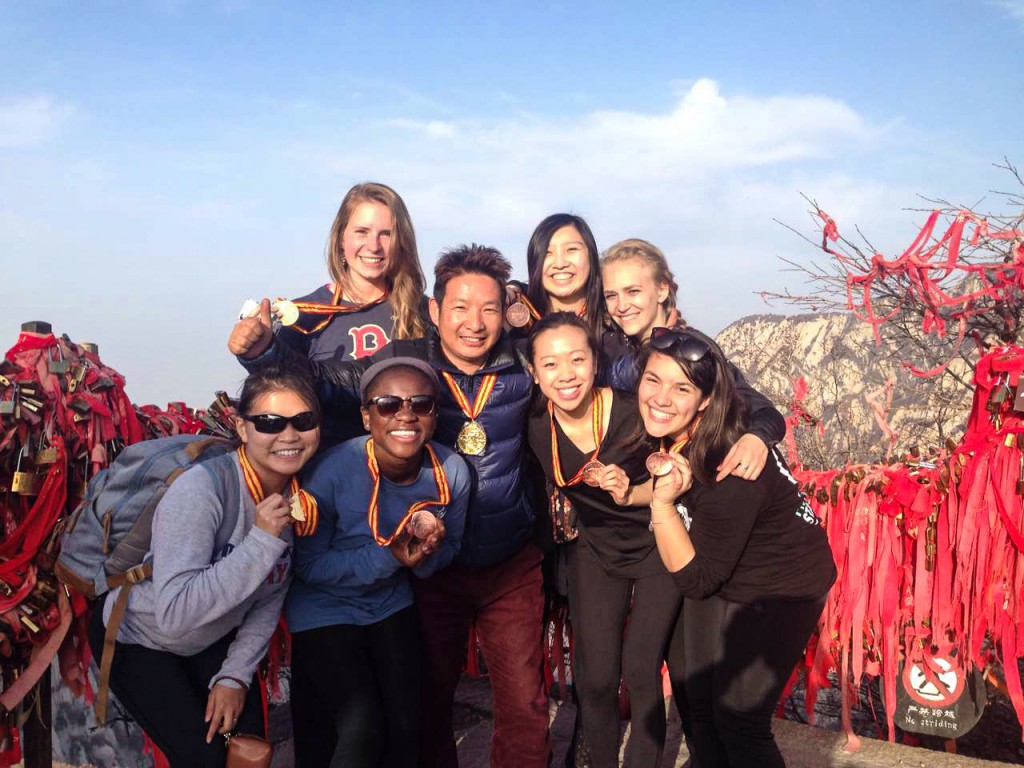 Like Mt. Huashan, the Terracotta Warriors are not near the main area of Xi’an. Getting there was quite confusing. We took a public bus for 8RMB each way from Xi’an Railway Station.

A note about the buses: there will be many people trying to get you on a bus that claims to take you to the Terracotta Warriors. DO NOT GO WITH THEM.

There is a line of people across the street from the Xi’an Railway Station where you can board legitimate buses. This bus ride takes about an hour so if you’re lazy like me you can sleep otherwise bring a book to keep you occupied.

The bus dropped us off in a parking that leads to a huge plaza full of shops, vendors and restaurants. We walked through the plaza and ended up in front of the ticket counter.

Once we bought our tickets we had to walk through this park in order to reach the exhibit. It was beautiful with all it’s trees blossoming and this gorgeous mountain landscape in the background. It’s the perfect place to sit down and have a picnic.

At the end of the park you reach another plaza where the Terracotta Warriors are located. There are three indoor pits full of Terracotta Warriors. Pit number 1 was the biggest, and you can see the curators at work restoring artifacts.

Not all the Terracotta Warriors have been unearthed; in fact many haven’t even been touched because they are painted, and when the paint hits the oxygen it fades away. 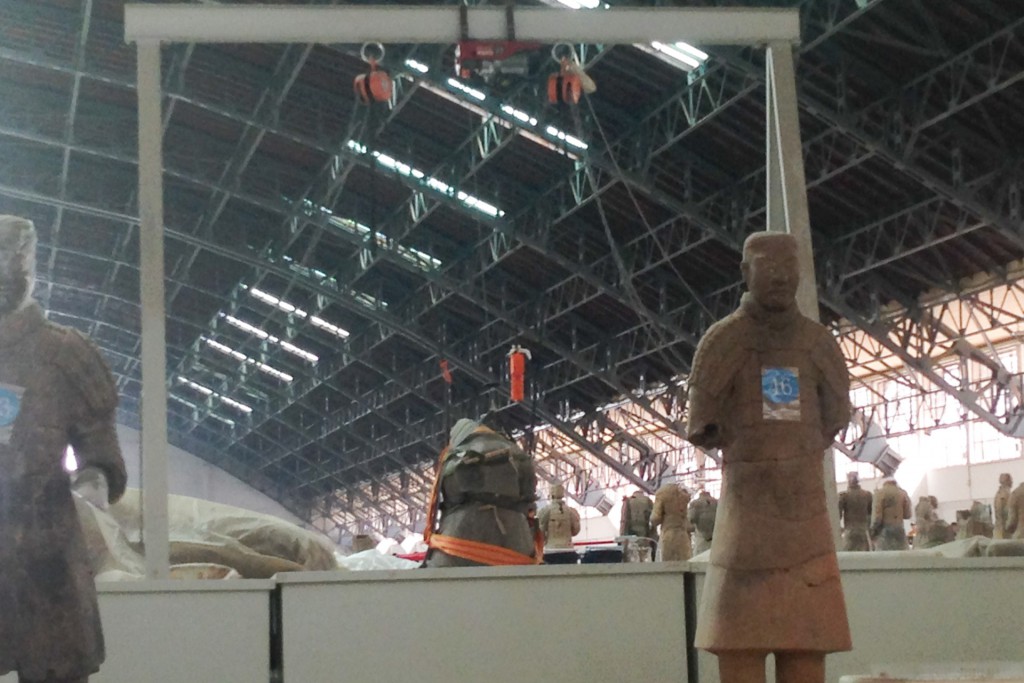 Pits numbers two and three are smaller and have for the most part been left untouched. In general though I could not believe the sheer size of the whole area. My friends and I walked from pit to pit for a long time taking in all the unearthed statues. As we looked at each figure we noticed that they all had individual faces. The amount of time and effort that went into building them is unimaginable – we couldn’t believe that there were still so many more underground.

Like the Great Wall of China, the Terracotta Warriors were outstanding. Seeing it in pictures doesn’t do it justice, and I’m so glad I made the trek to see them myself.

One thought on “A trip to Xi’an”